In The Midst Of The Storm 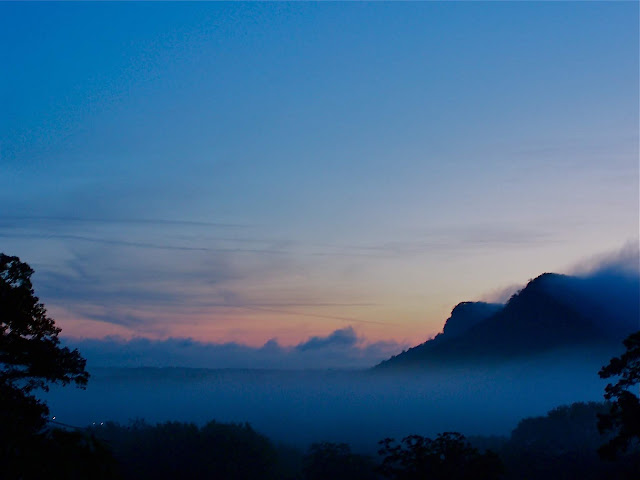 Recently on a trip back from southern Texas to Minnesota, we ran into heavy rain for two straight days.  Before returning, we as a family prayed for safe travels on our 1,500 mile return trip.   I told God in my prayer that day that we trusted him for our safety, but God had something else in mind, he was going to help my faith to grow.

While driving back, we had to take alternate routes in avoiding heavy traffic around major cities, this would normally prove to be non-eventful, but with the storms coming through, it was anything but normal.  Many of the streets of the small towns we went through had limited gutters for the excessive rain that was coming down, and so, at times, we found ourselves going through streets that turned into small rivers of water which consequently pulled our vehicle to one side of the road or the other. This was more than challenging when traveling at higher speeds when the out of town roads in the country were barely visible.  The water in the dark of the night was the same color as the asphalt service that we were driving on, which made the heavy water streaming across the rain soaked roads very much a major hazard.  As I drove I tried to keep calm not wanting to make my family nervous, so I gave an air of serenity, but inside I was wondering if God was in fact keeping us safe.  I found myself praying for our safety as I drove all the while showing my loved ones a peaceful smile. 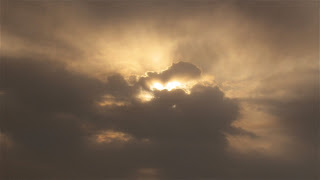 During a time of darkness while still south of Dallas, we got weather reports of heavy rain coming our way.  I wondered to myself, “Heavier than now, how could that be?”  And at that moment our electronic road guide said that we had to take an unforeseen left turn up ahead and this road would take us to the interstate.  I thought, “God is blessing us now!”  Anne was driving at the time when we promptly came to a railroad crossing out in the middle of nowhere and the lights started to flicker on the crossing arms.  I looked both ways and I barely spotted a lone train traveling at a walking speed.  I thought, “What now!”  My thoughts became vocal before I realized it and concern showed on Anne’s face.  We watched the train move painfully slow past us and the only consolation was that it looked like a very small train with only a handful of cars trailing behind the engine. Abby confirmed this when she said, “Dad, it is only a small train, this won’t be a long wait!”  I was relieved at that, but it seemed when looking through the heavy rain, that the train was producing cars out of thin air. I thought, “How could that be?” Then to make matters worse, the engine stopped right on the railroad crossing that we needed to drive over. It sat there and it sat there. It was about this time that we switched drivers and I found myself drumming the steering wheel with my fingers and Anne could see the frustration mounting in me.  It had been a very long drive in heavy rain and I was so looking forward to a bed with warm sheets enveloping my tired body.  Finally after waiting for the train to move, which it seemed an eternity, Anne suggested that we plot a new course.  Anne typed in another route and the navigation system plotted the new directions.  I turned the car around and we began a new route.  After a few miles my frustration began to cool, but I still wondered why God was not hearing our prayers.
No sooner than this thought left me when Anne said that she 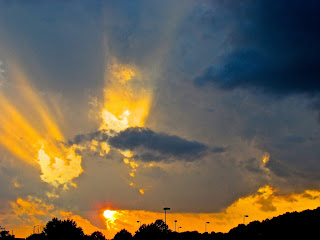 discovered that the same road that we were about to travel on, (train blocked our way route) was flooded over and was very dangerous to travel on.  I was humbled by this news and I found myself asking God for forgiveness for doubting him.  I then realized that God had indeed a plan for us, and for our safety as well.  He planted the train where it was his design to stop us, as well as the other vehicles waiting behind us from a possible tragedy. I remembered a few years earlier of how when a bad rain storm back home in Winona caused creeks to turn into raging rivers and how an elderly couple traveling down the road in front of our home drove unsuspectingly into the washed out road and into the raging river and consequently to their deaths.  Shivers went up and down my spine at that moment realizing that could have been us this night. 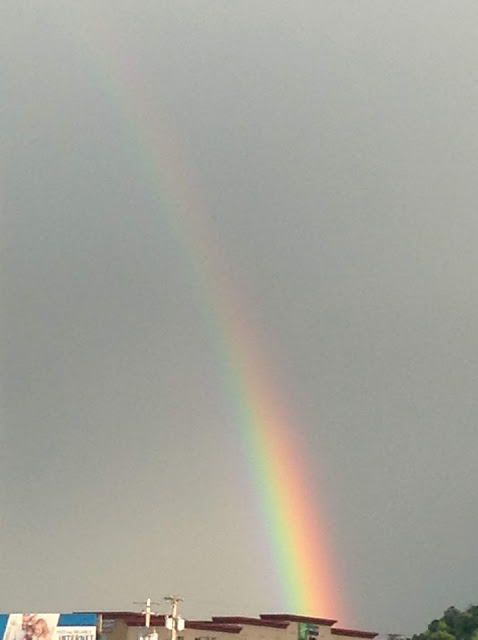 God proved again to us the next day that his guiding hands were upon us when a large Red Tail Hawk decided to fly perpendicular across our front windshield.  The hawk’s wingspan was around 4 to close to 5 feet across.  A Red Tailed Hawk’s eye- sight can see a mouse ten stories from up above, but it obviously didn’t see our vehicle.  I saw it take off from the grassy median up ahead, and it hadn’t gained much take off speed before turning toward our car.  In a split second I could just see it crashing through our front windshield with disastrous effect.  Then all of a sudden when its talons were level with our glass windshield, it went straight up like some giant hand had picked it up out of our way. It happened all in a split second, but time seemed to slow down to a fraction of its normal speed, all the while we were holding our collective breathes, waiting for the huge impact to occur.  Anne and I just looked at each other with mouths hanging open in surprise trying to absorb what had just happened.  We once again saw God’s hand delivering us from danger.  Again, we could only thank our Lord for his divine protection.  It was a time of trust and growth for me, and a time of being thankful for His mighty provisions.
Posted by August Thurmer at 7:17 PM 0 comments