Our Wonderful World of Nature Around Us

It’s interesting how much of the animal world is a mystery to us much of the time.  For our family, we feed many species of birds from the feeders surrounding our house everyday, without really thinking about their lives and how they are a part of our world.  Being in the Mississippi flyaway, our home is situated right along their flight paths during their migrations in the spring and autumn.  During these seasons we are constantly hearing geese, ducks, trumpeter swans, pelicans and a variety of other bird species-flying north or south according to the time of year.  For added pleasure, one only has to stop and listen to them calling to each other with sounds of encouragement on their journeys to lands unknown.  Some of these mysteries of God are revealed when one takes the time to learn more about his creation and the creatures that live around us.
Yesterday, Anne and I saw an oriole feeding on bugs by our porch, and just before coming into the house, I looked up and saw two turkey vultures circling overhead.  This is always a little unnerving to me.  Just when entering the doorway I turned around before going into the house, only to see our tiniest of feathered friends, (the hummingbirds) flying around the pear tree a few feet away.  It struck me at that moment, the wonder, that is, in the size and types of birds visiting our home everyday.  We have the Tufted Titmouse, many species of Woodpeckers, Blue Jays, Nuthatches, House Finches, Gold Finches, Red Breasted Gross Beaks, Cardinals and an assortment of other birds coming to visit our feeders on daily basis.
This morning I noticed that we had several Cardinals visiting our feeders.  Anne and I both chuckled when looking at one male Cardinal in particular.  He was molting, and he had lost the feathers on the back of his head.  His body was transforming to ready itself for winter.  A funny thought went through my mind at that moment, it appeared that he was experiencing male pattern baldness.  The poor bird almost seemed to be self-conscious when first noticing that we were looking at his head.  It immediately turned and went to the other side of the feeder, it seemed it did not want us staring at its unseemly hairdo.  The poor Cardinal, it is normally such a beautiful bird with its red headed crest and dark scarlet plumage.  Now in its humble condition, it seemed to seek out the shadows due to its inglorious state.
In the woods a few feet away, we have Owls, Red Tailed Hawks, and Bald Eagles who are all looking for rabbits, squirrels, snakes and chipmunks.  Every spring and fall we also have wild turkeys visiting our meadows as well.  This last spring we had about 20 turkeys coming out of the woods to forage in our meadow.  The site was breath taking; they were so beautiful prancing around in the tall grass.  Then all of a sudden, the woods and grassland became a mass of feathers and squawks when a coyote came bounding out of the woods chasing after the flock.  It seemed to have no particular bird in mind, and so it pretty much chased the group into the trees with no apparent victim.  They roosted for about two hours on the branches of the trees, and when the danger seemed to pass, they disappeared into the woods again.  Although I love to watch all the different species of birds around our house, I am glad that the raptors are shy and like to stay at a distance.  I would hate to have them landing on our roof or trees nearby, eyeing our cats as possible snacks. 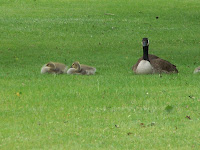 Now the day is ending, while I am closing the garage door I hear a nearby coyote howling in the woods just a few yards away.  For obvious reasons, one of our indoor/outdoor cats (Kelly) is very anxious to get into the house.  In speaking of Kelly, yesterday she thought that by bringing up her catch (mouse) to the door, we would let her in the house.  In Kelly's eyes, she appeared to want to give her treasure to our kids.  Seeing that we were not permitting her in, Kelly decided then that Anne wanted her mouse.  When approached by our kitty with her prize, Anne’s legs automatically retreated to her chest at lightening speed.  I am afraid that I wasn’t too much help at that moment since I was laughing pretty heartily at the scenario unfolding, that is, rather than having empathy for my poor distraught wife.  I then noticed the terror in Anne’s eyes over the prospect of having a mouse dropped into her lap.  With a desire to bring calm to the situation, I slowly walked over to Kelly, picked her up and carried her, and her catch out to the meadow.  There she happily trotted off with her prize knowing that she had done her best to share.  And so ends another day in the Thurmer family.
Posted by August Thurmer at 10:01 AM 0 comments