During our evening meal (supper) we have Anne’s folks over at times, and we enjoy the varied topics of conversation that we have during the course of the evening meals.  The issues we discuss vary from new dresses to that of our current political climate.  It is not unusual during these conversations to have our two cats (Toby & Kelly) move in and out between our legs during the course of the meal.  As a cat, Toby is not really interested in the conversations as much as she is in what we are eating, especially when we are enjoying food such as fish.  Kelly, our youngest cat, is a calico and has been known to have very queer habits.  For instance, during the meal, Kelly likes to jump up on the back of the cloth chairs that are already occupied.  She lies on the top of the chair and watches each of us eating with great interest.  It almost seems that she is following each word that we discuss with one another.  When someone else strikes up a new topic, Kelly jumps down and leaps on to the back of that person’s chair and seems to listen with great interest. 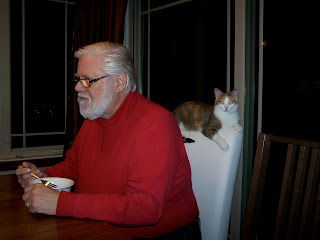 I remember reading about James Herriot’s cat that liked to visit different social events.  It would perch on a shelf, chair, or table and watch people interacting.  At irregular times it would take off from the Herriot’s residence and disappear for several hours, or days at a time leaving its owners wondering where it had gone.  I believe Herriot called it, “The Cat About Town.”  This story is a favorite of my children.  Like James Herriot’s cat, Kelly likes to be around people, whether it be with our family or with others in the neighborhood.  Kelly makes her rounds when the weather is fair, but she seems to stay near the house when it is cold and snowing.   Both cats came to us as strays, as with many stray cats, they chose their owners and not the other way around.  Consequently both Kelly and Toby are indoor/outdoor cats.
We have a meadow that has many mice and chipmunks for them to catch, and they consistently show their prowess by dropping their prey off at Anne’s feet, while we are having morning coffee together on the porch.  Sometimes to Anne’s chagrin, the critters that are caught by our cats are still alive, and at times, they think that Anne’s legs are sent by providence for them to climb.  During these moments when watching this take place, I am amazed at how fast Anne can move.  Her legs quickly retract into her soft cushioned chair, all the while there are two befuddled and confused creatures looking at her from the floor, the mouse and the cat.
Kelly, most days will find a comfortable lap wherever she can.  It is not unusual to see her lying on Anne near her neck; that is while Anne is typing away on the couch, preparing her online college classes that she teaches.  When Kelly is not with Anne, she can be found with Will, our 9 year old son or our 6-year-old daughter, Abby.  At times, it is not unusual to see Kelly literally hanging over Will’s shoulder as he walks by.  Kelly finds that our children are an unlimited source of entertainment.  It is not unusual to discover when Anne and I are going to bed, a rattling sound coming from the downstairs’ steps.  I listen as I hear a Lego sliding across the living room and then tapping down each step on their way to the bottom.  I get up and turn on the lights and see that Kelly is half way down the steps, batting with her paws a single Lego piece of Wills.  At times, I have seen Will putting together a new Lego toy, and both he and I have been astounded at how fast Kelly can be.  She jumps on the table, grabs a Lego and quickly runs away, with a young boy usually in hot pursuit.  I joke with Will telling him that Kelly enjoys the Legos as much as he does.  During those times though, Will finds little solace in my humor.  All in all Will is very patient with his little kitty.  He runs the steps and usually catches up to Kelly before the piece is lost forever in some unknown corner of the middle level.
It seems that most evenings both of our cats come alive when the lights are turned out.  They wrestle and run after each other, attacking one another in mock battles, that is until one claw or tooth finds its way through their thick fur.  A meow or hiss is given and then the playing continues.  At other times they sound like two miniature horses trotting across our hard wood floors chasing each other.  During much of the day though, we can find each of them grooming themselves or just sleeping.  It is during those times, one of us picks them up and decides the weather is too nice to let pass and puts the felines outside to enjoy the sun.  They give a meow of protest, but when getting outdoors, they discover what they have been missing. 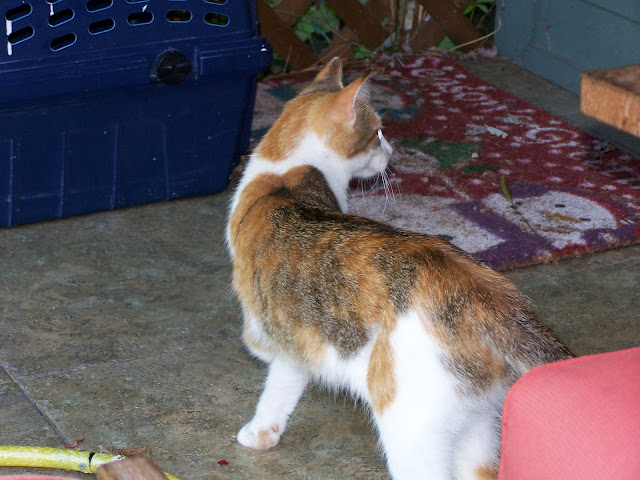