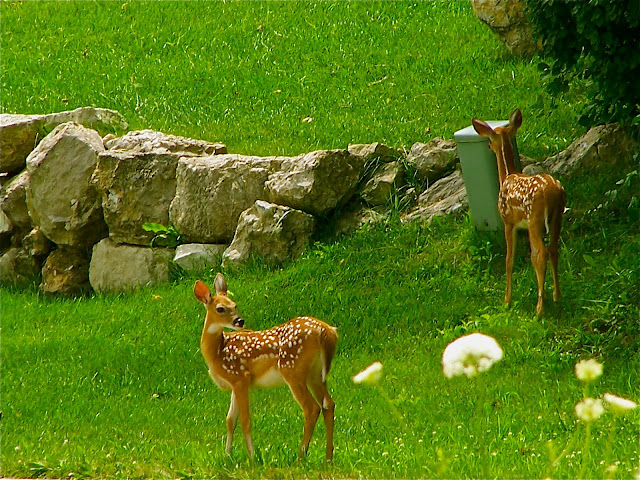 Yesterday was exciting in that we, as a family, got a chance to see two sets of baby deer.  In the morning a mother deer (doe) brought by her twins for us to see.  She was so proud of them and a little nervous as well.  They traveled by our living room windows and front porch.  I grabbed my camera and went on to the porch and after several minutes, when the mama deer realized I would not harm her little ones, looked away and went back to eating.  The twins looked to their mother whether to be alarmed or not, and seeing her graze contentedly, knew everything was ok. 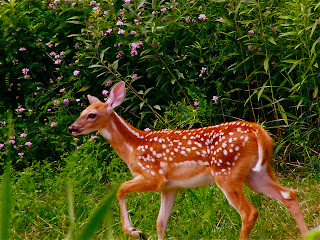 In the afternoon Abby excitedly yelled, “ A deer, a deer!”  We went to the window and saw another mama deer bringing her baby by to show off.  These are the same mama deer that were born near our house last year and before, and they know that we will not harm them, nor get to close.  Once in awhile a mother deer will let her yearling follow her for about a year and when it gets close to the mating season, (if it is a male) it will shoo the baby away.  This is God’s way of insuring that their line is not weakened by inbreeding.
Each fall the bucks (males) follow prospective doe’s and it is not unusual to see several female deer gathering in a group, followed by a buck that is watching over them.  The bucks are solitary creatures until mating season, that is when does allow them to get close.  After the mating season is over, it is not unusual to see them all gather in herds during the hardest parts of the winter.  I have seen several hundred gather at Kilen Woods State Park near where I grew up in Jackson, Minnesota.  While cross- country skiing with my friends, it was not unusual to see them grouping in large herds for protection and warmth. 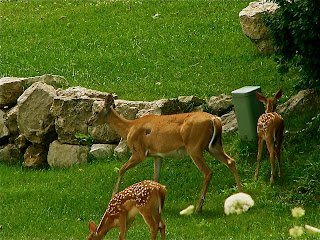 Usually during the months of January and February are the hardest times for deer.  I call it the “starving times” since so many have a difficult time finding enough food to survive.  I have seen them strip bark from vines and trees to gather nutrients in their search for food.  Several times I have wanted to clear vines from our meadow, but have been stopped by the thought that these same pesky vines offer sustenance for the deer during the (starving) months of January and February.  Not only do these vines offer food during the hard winters, they also encircle certain places in the meadow for the mother deer.  She finds that it is a safe place to have her young.  When I was living in New Ulm, Minnesota, while cross-country skiing in their state park, during one winter, I observed state trucks coming into the park to hall the weak and dying deer away to be exterminated.  There was not enough food for them due to the heavy snowfall, and so consequently, many died that winter. 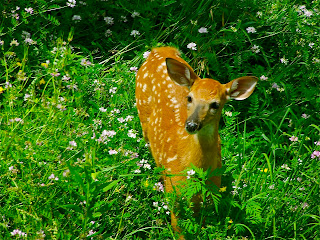 God has prepared his creatures with natural defenses that allow for their survival.  With deer, when they are young, (fawns) have no scent on their body.  This is so that preditors cannot find them.  Mother deer only briefly spend time with them to feed them and then leave them alone again.  Since the mother’s scent would pass on to the baby if the doe spent too much time with the bambi, she leaves the baby alone most of the time.  With camouflage that God has given the babies by their white spots and having no natural scent, they are virtually invisible to the world.  One day when I was spraying for weeds in the meadow, I almost stepped on a baby deer.  Just before my foot touched it’s skin, it jumped up and ran a couple of steps.  Steps mind you that were very wobbly.  I could quickly see that it was brand new and it’s mama must have been out in the woods feeding.  So I quickly retreated and left it alone before a nervous doe found me to close to her baby.
Just a note:  If you encounter a baby deer, leave it quickly.  If the mother is nearby, which in many cases they are, the doe will protect it’s young if they see you as a threat.  Doe’s might not have horns, but they do have very sharp hooves and will not hesitate to use them if they see you as a threat to their young fawns.  While hunting in the winter back on the prairie, near my home town of Jackson, I came across ice that deer had chipped out with their sharp hooves.  The ice was chipped down to over six inches in depth by using their hooves to search for water to drink.  So, do not spend anytime near a baby deer, their mama is usually close by.
We noticed one of the doe’s staying near our meadow grazing a lot this spring.  Because of this pattern of hovering around one area, we knew that she had a young one nearby, and so we told our children not to get to close to the mama deer, or it’s baby during this time. 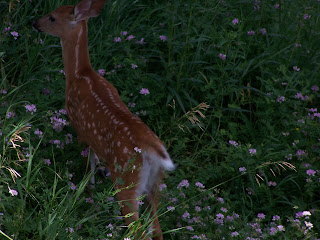 After several weeks of growth and development, the fawn gathers it’s strength and soon the mother sees that it is strong enough to be able to follow her when she feeds.  The excursions gradually get longer and longer as the baby deer builds up its strength.  During this time, the fawn is slowly weaned off of it’s mother’s milk and the baby begins to eats grass like it mother.  I have seen a mother deer outside my living room window gently bumping the baby with her leg, when she figured junior either had enough milk or it was time to eat more and drink less.
Deer are so wonderful to watch, God has given them speed and grace.  They truly are one of his most beautiful creatures.  Even if you do not have deer in your neighborhood, take time to notice God's many creatures that surround your home.  They will bring so much joy to your world.  The more that we learn from them by watching and observing these wonderful creations, the more we see how they also fit into God's master plan.
Posted by August Thurmer at 12:24 PM 0 comments